‘I am gARTh’ residency and exhibition

‘I am gARTh’ is an exhibition of work by artist Garth Gratrix created during a one month residency at Oxheys Mill Studios. Garth had access to a studio space in the basement and also worked within the project space during the last exhibition, creating work which responded to the building and the environment in which he was working. The resulting exhibition features several pieces of work conceived and made whilst at Oxheys, which reflect a larger project on which he has been working.

The residency came about after Garth gave a presentation and submitted a proposal to Oxheys back in the summer. An agreement was reached with Lisa, Denise and Evelyn as to the space he would have available to work, which was initially to have been on the first floor but in the period between agreeing the residency and it starting, several other artists had joined the studios so Garth found himself in the basement. It didn’t seem to bother him though, as natural light was not a requirement and he set to making his work.

We were a little surprised when he first started painting the outline of his room on the floor of the project space – it was somewhat larger than we expected and rather than just the outline it ended up being a solid painted area on the floor. He spent hours on his knees painting on all the lines and he’s going to have some real fun cleaning it all off! 🙂 The tea bag house was another great idea, which took longer than he thought to create – a real test of his patience. The smell of tea coming up from the basement where he was making it was overwhelming – we were surprised he wasn’t on the ceiling with all that caffeine!

It was fun having Garth around and we all agreed it was good to have another artist there who was not directly involved in the studios but was responding to it. We think he also found it useful to have other artists around to bounce ideas off and try out ideas. Garth has been blogging about his experience over on the Two Hats website – more details here.

We would certainly be pleased to receive other proposals from artists seeking a residency with ideas on how to respond to the building – just contact us and arrange to come in for a chat initially.

Garth’s residency culminated with the exhibition of work which opened on 3rd November and runs until 8th December. The Private View saw an encouraging number of people turn out and enjoy some wine kindly provided by his sponsor for the evening,  Teraphim Consulting. If you missed the event, here are some photos: 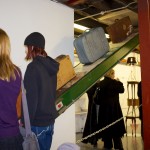 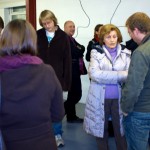 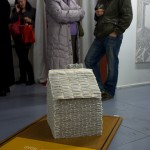 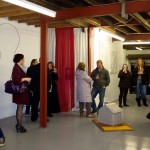 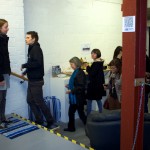 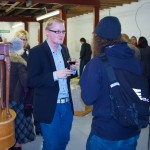