Since we got the keys to the mill in early April, we have made some great progress. As you might imagine, having stood empty for three years, the building was rather dirty and in need of some TLC. We set to, armed with buckets, mops, paint, brushes, brooms and Henry the vacuum cleaner, on a mission to clean the old place up and turn it into a gallery and studios. 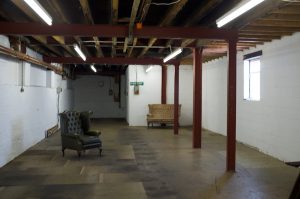 Ground floor of the mill when we first gained access

Within a couple of days we had started to make a difference. First priorities, all of the toilets were scrubbed clean and kitted out with handwash, toilet paper and clean towels. Then the kitchen was tackled and a refreshments area set aside in what had been the mill office, so that we had somewhere to make a brew, have a rest and discuss plans. We set up a noticeboard on the ground floor so we could leave notes for each other, as mostly only one or two of us were there at any given time but mostly we updated each other via email.

Having previously agreed that the ground floor space would be virtually all used as a gallery/project space, this was our main priority so next came the sweeping and the vacuuming and what a job that was! It is an enormous space and all of the ceiling rafters and girders were thick with cobwebs and dirt, whilst the old brick walls were likewise black with dust and grime. Poor Henry worked overtime as we each spent hour after relentless hour vacuuming the rafters, the girders, the walls and the floor. It took over a week to complete just the ground floor space but eventually, we had cleaned it up. Once the girders and the conveyor had been washed down, it was starting to look, and smell, a lot better! We also inherited a few old mildew-encrusted chairs and a broken wooden table, which after some careful cleaning up and repairing, came up nicely and will be made use of.

The next job of course was painting the walls – no mean feat and it took rather longer than we at first thought, as the walls were so dry the paint just soaked in so two and in some places, three coats were needed. It seemed never-ending as we each went in and painted a section, until we finally had completed the main space. With all matte white walls it was really starting to look something and the reflected light made a big difference. 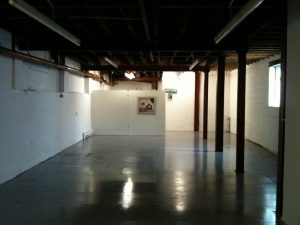 The ground floor after cleaning and painting, with the first partitions up

After the walls, the floor was the next big job. Having been used as a factory with oily machines in operation you could see the outlines of where the machines had stood and there were a lot of oil stains. After cleaning it up as best as possible, the floor was painted battleship grey with proper floor paint. Needing five days to dry, we couldn’t go in until it had fully dried but what a difference that made. Not perfect, due to the condition of the floor itself but what an improvement! Now we were really getting somewhere.

Time to start setting up the studios.

This site uses Akismet to reduce spam. Learn how your comment data is processed.