You are browsing the site archives by date.

This new installation explores the leaf as a sign, highlighting it’s accepted role in identifying species coupled with an inherent spiritual significance; acknowledged by many cultures around the world. Signatus is a showcase of original work, created in the past year, as a result of a residency in the print room at UCLan on the […] 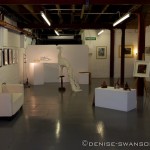 LAN Open closes for another year

The Lancashire Artists Network Open exhibition for 2013 has now closed and artists have collected their work which ranged from a life-size rhino head, a white peacock and a brown hare, to genetically modified vegetables, an iguana behind bars, a pussy riot head, a preying mantis and some delightful prints, drawings and paintings. A fabulous […]

The LAN Open exhibition for 2013 closes on Saturday 21st September so if you have not yet had a chance to visit, do come along. It has been a fantastic show, with a real diverse selection of work and the feedback, both from participating artists and from visitors,  has been really encouraging. The Preview event […]

It has been a busy summer at Oxheys with lots of work and a few changes. In the basement, Joe, one of the founding artists, moved out of his studio and was soon replaced by Terry, a ceramist, currently doing an MA at UCLan. Terry originally set about cleaning up and repainting  one of the […]